OK… I know it seems I talk a lot about the weather but when you get a string of 40F - 60F days you want to talk about it. And take photos, walk and daydream. Yes this is coming to an end with a snow storm predicted for later in the week. That’s OK too. we need the snow (water). 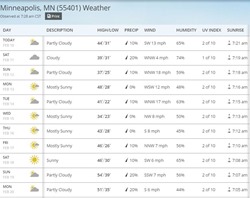 Yes… a photo of the extended forecast. If you give me temperatures in mid February that start with a “4” or “5” I am going to celebrate it. Sure we need some snow or rain to get us out of a minor deficit but I’ll take what the next week or two are going to bring.

Really sad news this week with the passing of Ray Christensen. Ray was the voice of Gopher football and basketball and his voice is engrained on my brain. I remember jumping into leaf piles with a football listening to games. I was in my cousin’s basement playing floor hockey in 1986 when the Gophers won at Michigan. I had the TV on mute with the radio on when the Gophers upset #1 Penn State.

All of the basketball games... 1,309 of them and 510 football games. I was trying to wrap my brain around how many people over a 50 year career heard this man.

Posted at 11:35 AM in Gopher Football, Minnesota Morning | Permalink | Comments (0) 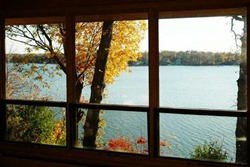 After 13+ years living in the North Loop of Downtown Minneapolis I am trading my #CityLife photos for 2 years to this #LakeLife view of Lake Minnetonka. Now that I have a commute I’ll have to do a much better job of scheduling my work days. Well worth it.

This months Enterprise.MN was with Clay Collins, CEO and Co Founder of Leadpages. Cole Grolmus always does a great job asking questions of tech leaders in town and getting attendees to ask follow up questions.

If you’re curious about the Leadpages story click the videos below and check out Leadpages Careers… they are hiring.

The photo above was from this past weekend on the Hennepin Avenue Bridge looking east. It was a very calm and quiet evening in Downtown Minneapolis and it was good to take a few minutes and do some “reflecting”.

I am a big fan of companies that show off their culture be it on Instagram, Twitter, LinkedIn or a company blog. Just as when we recruit we are hoping to find more about candidates… candidates are doing the same with us. They want to check out the CTO’s Tweets, Instagram photos showing events and culture and a blog where one can understand the “voice” of a company.

Minnesota Morning | phData, Sportradar And US IT Employment

Yesterday I was in the Lake Minnetonka area, Minneapolis west suburbs, and found myself day dreaming about #LakeLife summer days. I took this photo imagining it to be 80F and in June. Good news… days are noticeably getting longer now and winter is more than half over.

Tech.mn has an article Minnesota’s Big Data Bros Are Crushing It on Brock Noland and Mac Noland (@mcdonaldnoland) co founders (and brothers) of phData. I have seen, but not yet met, them at CoCo.

Continue reading "Minnesota Morning | phData, Sportradar And US IT Employment" »

No rambling from me today… my mind is running in 6 different directions but while typing I saw this shared on Facebook by 10+ of my friends. Seeing that it is not a political post I clicked on it and glad I did:

A couple of weeks ago Amazon made a big splash with an announcement of hiring 100,000 full time with benefits workers in the next 18 months. It was covered by most media outlets including here in Minneapolis. This comes after many retailers have announced layoffs and store closings.

Facebook’s “On This Day” shows me that many years this has been a cold week in Minneapolis… looks like I’ve posted a number of thoughts and photos of very cold days. That seems to parallel a local weather report I heard that this is historically the coldest week of the year. NOT this year. While we have been colder than average for much of the past month, we are experiencing a couple of +40F days and the extended forecast is above normal. 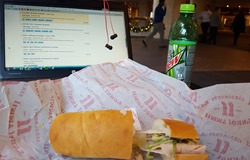 “The not so glamorous side of #recruiterlife: 12 hour day, caffeine, sandwich in the skyway, Spotify, 21 tabs and a bunch of Chrome extensions. Looking for iOS Dev's #MNtech”

I posted that photo yesterday after having a conversation with a HR friend who asked if my day was always full of meetings and events. I said no, there are a lot of phone calls, sourcing and writing too. They said an occasional photo of a normal work day would be interesting. That’s fair… I think a view into what a full work day is like might be interesting including the “boring” stuff and 11 pm sourcing sessions.

Not because 2016 sucked or was an awful year. 2016 was a year of business and personal confirmation. I don’t know that I learned a lot of new things… but I validated/affirmed what I thought was true. What I thought I was good at I am freaking good at it. What I thought I suck at I really suck at. And the people I have around me, are the best. I’m a lucky guy.

Knowing all that, for me, is HUGE.

I have been looking forward to 2017 and taking a number of big steps this year. That includes the next item…

I don’t do them. I never have. Nothing wrong with them but I think any day you wake up you can make a change. So why wait 365 days to do them.

Earlier this week I took a drive to St Paul to check out the Christmas lights at Rice Park. A few days prior we had snow on the ground but after some rain it was all gone. I’ll make another trip over there when it snows again. A couple of photos:

After spending 1/3 of the 2016 summer in the Alexandria, MN area until the holiday weekend I had not been up there in 2 months. Obviously gone are the warm summer days and the fall colors but the area lakes are still ice free. So first thing I did before seeing family was find a lake and sit on some rocks:

The next day before Thanksgiving dinner I took a country road drive and while doing some thinking pulled over a few times to take a couple of photos:

Like most people 2017 was (is) on my mind and I have been thinking the past couple of weeks about what to add to my personal and professional life and what to take out. Things like volunteering, clients and types of work, friendships, writing, speaking and new projects (should I do them or not).

It’s been a week since Election Day… leading up to it I was ready for it to be over and on to whatever was going to be next. I’ve been having a “be careful watch you wish for” moment. I was guessing it would be a new version of what we have endured the past months and years. So far that seems to be the case.

On Facebook I noticed I had posted this 4 years ago in the early hours after the 2012 election:

While completely jaded about our entire political system and hoping someone steps up in the next weeks and months that can be a more centrist politician and start uniting the country, or at least represent the middle 40% of us, I am still grateful that we can have “peaceful” elections no matter how messy they are on TV and online.

On my way to the voting booth I took this photo: 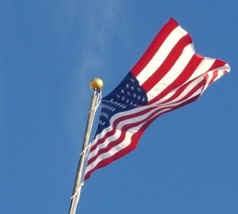 I’ve been finding myself “looking up” a lot the past week.

We’ve had an amazing fall in Minneapolis (some photos below from this weekend) and the forecast for this week is in the 60’s. Why I am talking about the weather to start this… anyone who was in Minneapolis 25 years ago today will remember the Halloween Blizzard of 1991. An epic storm that dropped 28.4 inches of snow over three days.

I was in college then and my fraternity had a Halloween party that I was not able to get to… I was not living near campus and by the time I started to make the drive it was too late. Roads were not drivable. I missed a 3 day party #BLEEP

There have been a number of IT layoffs in Minneapolis in 2016. While sensitive to those impacted, in a macro view I would call most of them “normal”. Most people found jobs within weeks and life continued on.

In the next days there is going to be a BIG announcement from a company that will impact 100’s of local tech pros. Most will be OK either landing in the new structure, applying for jobs already posted at the company or finding a new job at other companies. But this is going to get some headlines. 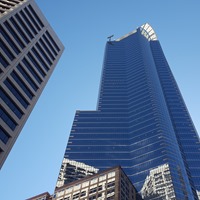 I am on day five of doing nothing and it feels really weird. One part freeing and one part W T H… I should be working my (bleep) off. One good thing is I don’t wake up exhausted any more. And I seem to be doing some big picture thinking which I guess makes sense when you are not running off to the next meeting, conference call or candidate interview.

Since I wrote Taking A Step Back, Skate Where The Puck Will Be And What’s Next For Me almost a month ago to the day a bunch of things have gone including (not in order):