Being a Fueled Collective (formerly CoCo) member I have been watching phData the last couple of years grow its staff and footprint in the space.  A couple of months ago I reached out to a member of the leadership team with a friendly referral for a role they had open and that person was hired. I was also aware that they were about to enter another significant growth phase so I reached out again to learn more about them and see if they might need some help.

Fast forward a few weeks to the end of March and my first all hands meeting... and the BIG announcement of the $2.5M Series A funding through Arthur Ventures. 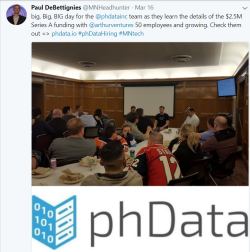 That's a fun way to start working with a group. The leadership team did a great job describing how the funds will be used, that not much changes, we will be adding new members to the team and Ryan Bosshart was named CEO. Essentially, this is my take on things… phData is shifting into a higher gear and things are in place to make it happen.