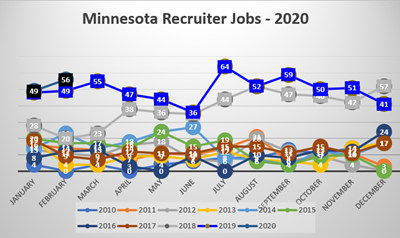 NOTE: What follows was written the 3rd week in February prior to the major global concerns of Coronavirus, the Wall Street correction and then fear of pandemic and a resulting global recession. As I post this there is not enough data and information to make further predictions. My last sentence below is a bit ironic/haunting.

When I last wrote about Minnesota Recruiters being in demand, Minnesota Recruiters In Demand - Summer 2019, I was thinking that we finally hit the pause button or a plateau in recruiter demand and the job economy in general. The dreaded “R” word was being kicked around a lot of places as being on the horizon and I was thinking maybe we were going to find a new “normal”. Still hiring but not at the same frenetic pace. Sort of a slow down and busier than usual.

Things have not changed in a significant way.

As you look at the image above, you see a lot of data points in the bottom 1/3. That represents the number of recruiter jobs I posted monthly from 2010 to 2017.

2018 is the gray color and you see that it breaks out from the previous years data and then… keeps climbing.

In short, the economy did not slow down further the rest of the year and many thought that was the dip in the economy that was predicted. And if so… not so bad.

Take a pause… some things to know first and then some thoughts I am having:

Data points (may or may not include revisions):

“A survey of employer hiring sentiment found more optimism across the District for the first quarter of 2020 compared with the same survey a year ago. However, two other regional hiring indexes that include Minnesota and the Dakotas had softer outlooks, including one that suggested contraction in manufacturing employment. A poll by the Minneapolis Fed of greater Minnesota firms found generally soft hiring activity, particularly compared with a similar poll in mid-2019.” 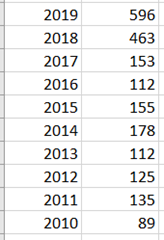 Now some comments and thoughts (in no particular order) in bite size pieces:

What this means for Minnesota Recruiters and companies trying to hire them:

Short of a world economic or political event… Minnesota Recruiter demand will continue into the Spring hiring season and likely beyond.