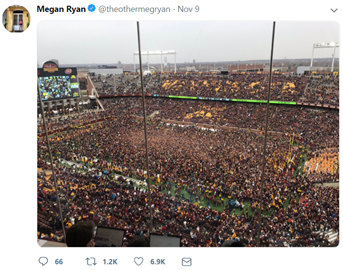 Earlier this afternoon I went to a local establishment to pick up a “to go” order of food. I was wearing a “M” hat and a gold t shirt under my Gopher football sweatshirt. I think at first glance I would easily pass as a Gopher football fan and one might infer I am in a really good mood today.

While waiting at the bar for my food, two middle aged guys strike up a conversation with me. One asked, “Did you watch the game?”

Immediately one of the guys says:

I waited a moment to gather my thoughts and trying to quickly assess if this guy was sober enough to have a conversation with. He seemed to be so.

Dude 2: “Bernie Bierman would be pissed off about this guy”

Me: “Did you meet Bernie Bierman?”

Me: “No, I don’t think so. The thing is, you should probably do some research, know some facts and hear some stories about the coach, staff and team. Maybe you would change your mind. Or, you could continue to be a hater. Either way, I am going home to find out how high we jumped up in the polls and research bowl game destinations.”

Even after yesterday’s win I still have a lot of friends who are not supporters of Coach Fleck. In the past they have said things like:

Row the Boat is not a Minnesota saying

He says “Elite” too much

His enthusiasm is immature. I don’t like that he is chest bumping the players or sprinting with them between quarters

HYPPR… change the narrative… change your best… nekton… oars, boats and compasses: what’s up with all the catch phrases and buzzwords

It’s all about him

Changing the culture… WTH it was fine when he arrived

Crowd surfing in the locker room after big wins

Here’s what I ask my friends and would have with the guys in the bar… what is he doing that you don’t like? What part of the following do you find so horrible:

They’re focusing on the team academically, athletically, socially and spiritually.

It’s clear from listening to players and their families that they very much appreciate the program they are in.

There’s more but that’s where I start.

We’re clearly better than a few years ago.

This is not a knock on Coach Mason or Coach Kill. Without either of them we would likely still be at the bottom of the conference.

All season and through yesterday I’ve been hearing that we need to play someone good. OK, did that and won.

I frequently hear that we need to beat Iowa or Wisconsin. Umm, did you forget that we beat the Badgers last year and The Axe is in our trophy case?

I fully appreciate that Coach Fleck has a different persona about him. I get that it does not fit the Minnesota passive-aggressive, doomsday and heavy does of “realism” many around here are afflicted with.

He is the one who can recruit, coach and win here.

He is the who can build young men here.

He is the one who can wake up a long sleeping fan base.

He is the one who can bring back the glory days of Gopher football we all dream of and speak about.

He is the one player’s want to play for.

FYI… I don’t think it’s a maybe. I think Coach Fleck and this staff are exactly who we need now and years to come.

Who freaking cares what words he uses, that he sprints at the end of a quarter and chest bumps his player’s. If that’s the worst thing you have about Coach Fleck… he’s not the issue. You are.

Listen to his press conference (pasted below) from yesterday and tell me what you disagree with.

Here’s my favorite quote (I hope I have it correctly):

"This is what we can become. I'm sure there was some people on the final drive who said, 'Oh, here we go again.' Gotta let go of all of that. Fifty years ago, 40 years ago, 30 years ago, 20 years ago, 10 years ago, we've got to change at some point. This team's proven that. Does that mean we're going to win 'em all? No. But they're doing a lot of special things that you can keep building on to make your culture stronger, and your program stronger, and make it more of a national brand."

Coach Fleck, I’m in. Have been and will be.