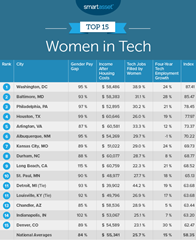 For the past five years SmartAsset has put together data (gender pay gap, income after housing costs, tech jobs filled by women and four year employment growth) and ranked them. Click The Best Cities for Women in Tech in 2019 for this years survey.

St. Paul ranks in the top 15 for only one of our metrics: It lands at 12th for gender pay gap. But while it doesn’t hit the heights in any single metric, it also won’t leave women in tech with much to complain about. St. Paul ranks no worse than 33rd in any single metric — in the income after housing data point — and ranks in the top 20 in two metrics.

Women are fairly well-represented in the tech industry. Women in St. Paul occupy 26.4% of total tech jobs and the average women earns 89% of what the average man earns.

One reason why St. Paul ranks among the top 15 cities on our list is its relatively large four-year tech employment growth. The number of math and computer-related jobs in the city increased by 18% between 2012 and 2015. That’s faster than average.

2015 (they changed their weighting system after this first survey)