Minneapolis #4 Best City In The U.S. To Find A Tech Job 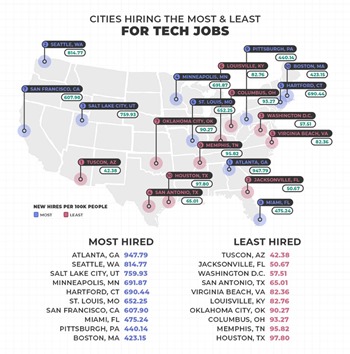 Survey time again (I’ll have another tomorrow)… this one from AgileCraft and their post Best Cities for Tech Jobs in the US. They “… looked at some of the most demanded tech jobs as well as EMSI US Occupation hiring and salary data to come up with some interesting results.” I think by “interesting” they mean not what the average Jane or John Doe would be thinking. For those (I am one) who are always crunching numbers and analyzing surveys these numbers are what I expect to see.

Their Top 10 Cities Hiring The Most For Tech Jobs:

That’s right… Minneapolis is #4. Maybe it’s interesting to see Hartford and Miami on the list. The rest of the cities have all been seeing considerable job growth. Minneapolis, Atlanta and Salt Lake City frequently are mentioned as top “Tier II” cities behind the Bay Area, Seattle, New York City, Boston and Austin.

Digging a bit deeper into titles we rank: 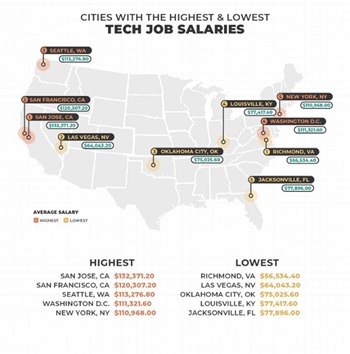 We do not rank in the Top 5 for top salaries nor in any of the titles. That is not surprising as San Jose, San Francisco, Seattle, New York and Washington D.C. generally win on those numbers. When you adjust for cost living, as I will do tomorrow, then Minneapolis Ranks high for tech salaries.