Minnesota #8 On Tech And Science Index 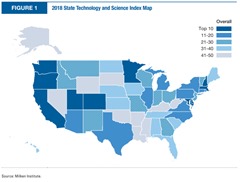 If you’ve stopped by here a few times you are aware that I love a good survey, ranking or index. It’s why I like sports… every day you can look in a newspaper or online and find out if your team is winning, losing, where it ranks and how it is trending.

In this case my team is Minnesota and I like to gauge how we are doing, trending and comparing.

The Milken Institute released their 2018 State Technology and Science Index, something they do every 2 years, and it always has a lot of data to look at.

Minnesota drops one spot to end up eighth on the 2018 STSI. After a strong performance in 2016, Minnesota’s score decreased by 6.47 points to 63.11. The state dropped two places on the RDI to land at 21st. Minnesota also ranks 21st on the RCI in this edition of the STSI, a five-rank drop from 2016. Minnesota increased one rank on the HCI to fourth, while the state dropped to seventh from fourth on the TSW sub-index due to decreases in the concentration of computer, engineering, and science-related occupations. Minnesota dropped three ranks to 18th on the TCD.

The state has been focusing on creating a workforce to support the growing high-tech sector. The statewide College Occupational Scholarship Pilot Program for STEM-related degrees is one such program, and in conjunction, Minnesota has built eight IT Center of Excellence facilities to focus resources on education and internship programs. These eight centers provide a pathway for entering the high-tech workforce, with an emphasis on cybersecurity, expanding the high-tech workforce through diversity recruitment, and providing K-12 grades with a tech-related curriculum.

Minnesota is also making efforts to expand access to broadband internet. Currently, Minnesota has 69 percent of households with broadband internet, ranking 19th in the nation. One estimate puts a $1.4 billion price on the infrastructure needed to connect the remaining 31 percent of households in the state. If Minnesota can provide statewide high-speed internet access, this could generate long-term economic benefits by connecting its population to opportunity through modern infrastructure development. By providing the necessary education, workforce, and infrastructure as the knowledge economy develops, Minnesota should be competitive in the long run.

One can dig further into the rankings…

How others in the region rank:

So, how are we doing… for me, and looking at the map above, I’m feeling good abut Minnesota. I have long said that I want Minnesota and the Twin Cities of Minneapolis and St Paul to be thought of as a leader in the middle third of the country and #1 in the Midwest.

Yes, there are areas we can and should be doing better. In order for us to continue to attract people from other parts of the country we need to be the absolute best version of what we can be. When that happens… we will find more people who want to live and work here (finding a quality of life) and bringing with them diversity in thought and experience (I think our region needs more of).