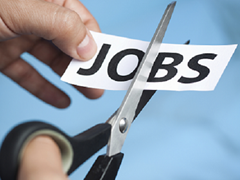 First the small one… the Regis Corp situation was reported by the Minneapolis StarTribune saying that 75 corporate workers have been impacted including 15 in IT. Regis has been restructuring a bit including a sale of some mall based salons. Click Regis cuts several dozen headquarters staff.

The big one… Wells Fargo (who used to be headquartered in Minneapolis with an ongoing significant presence of around 20,000 workers in Minnesota in banking, mortgage services and investing) announced a 10% reduction over the next three years. Wells Fargo has around 265,000 employees in total so 10% being 26,500… that’s A LOT of people. CNBC has Wells Fargo is going backward with thousands of job cuts as JP Morgan and other banks boom showing how what is going on at Wells Fargo, and why, is not going on at other banks.

The Portland Business Journal did a Q&A with Tim Sloan, CEO, EXCLUSIVE: Wells Fargo CEO talks cuts, calls reports of his pending departure 'just not true' on the day of the announcement and here is one item regarding the layoff:

“The bank this morning announced it would reduce headcount by 5-10 percent. Why?”

Given the transformation going on in the economy and going on in financial services — somewhat driven by technology — as we provide more technology to our consumers to help them self-service, we're going to need a few less people. Likewise as we've transformed the company we've centralized a fair number of activities. Whenever you do that you tend to have a bit of an overlap from a team member standpoint.

What I commented to the team is that, over the next three years, it's likely we'll have 5-10 percent less team members. It's not layoffs of 5-10 percent. It could be through attrition. Some of it will be displacement. I just wanted to make sure folks appreciated the likely scenario is we're going to have fewer people working at Wells Fargo even though we're going to continue to grow.

A couple of months ago the MSP Business Journal had Wells Fargo lays off 130 Twin Cities employees.

While the economy in general is doing well enough this is (and I say this all the time) another reminder that everyone needs to be managing their career, ongoing education and networking.