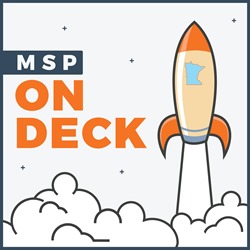 I learned a lot during this episode.

We started by talking about Andy Slavitt (@ASlavitt) who is new to me. For starters he has 189,000+ Twitter followers where his bio is:

Ran Medicare, Medicaid & ACA for President Obama. @usatoday, Columnist. Launching a health care initiative for the next decade in 2018.

It’s that last part which is why we were talking about him. Kathy wrote about it here (subscription)

Casey drops a nugget, from back in the day, that the author of Android for Dummies was a dev from Minnesota. A second time in the episode I felt like I was horribly put of the loop.

NOTE: after editing the post I researched who this mystery person is and found Donn Felker (@donnfelker) as the Author of Android App Development for Dummies who did live in Minnesota at the time.

We then get into a rundown of Minnesota Venture Capital firms that are active in the local tech scene: Arthur Ventures, Brightstone Venture Capital, Rally Ventures, Matchstick Ventures, The Syndicate Fund, Sofia Fund and Dundee Ventures. And near the end of the episode we add Loup Ventures.

I ask Casey a couple of questions about how far does $750K (seed round) go in a startup and when does a CEO start getting paid.

Kathy brings up a survey that says Developer is the best job in the U.S. in 2018. She asks me if it is true and I give some perspective. I also share that I would have interest in being a UX Designer or Product Manager. And yes I said I would rather shove a pen in my ear than learn to code.

And no Reporter and Recruiter are not on the list.

We then get back to some news we spoke about during the last episode… SPS Tower has been officially named. We do some SPS trivia too.

ADC Telecommunications… more “back in the day” talk.

At that moment I then ask Casey where was he back then. I should note, I’ve known Casey for a long time. He’s a brother to me. Casey gets specific about his days as an entrepreneur and being a college student and shares some things I did not know about… “the untold story”.

Below you can listen to the podcast.

To connect with Kathy, Casey and MSP On Deck:

And click MSP On Deck Podcast Is Live And Focusing On The Minnesota Tech And Startup Scene if you are new to this and wondering how it came to be.