Let met start with a disclaimer (and one Teresa Thompson, my attorney at Fredrikson & Byron would want me to make)… I am not an attorney and while I may think I am an expert at some legal things after many years of watching  Law and Order reruns, I am not. Speaking of Teresa… she spoke about this topic at my Midwest Recruiting Bootcamp this summer.

ProPublica and The New York Times collaborated on a story posted yesterday with these headlines:

The short version is that they found ads posted by companies like Verizon, Goldman Sachs, Target, and yes…Facebook targeting certain age groups. And that Amazon, Northwestern Mutual and the New York City Department of Education are in the process of or recently changed their strategy.

And to be clear… these are not the only groups who have been doing this. More on that in a moment.

One of the conversations Teresa and I have had is… can companies, tech specifically, who have an emphasis on inclusion and diversity in the workplace post jobs targeting women and people of color. But does that then discriminate too was one of my questions. From there I get further in the weeds so let’s get back to this post…

And this class action lawsuit that was also filed in the past day:

“Today, the Communications Workers of America (CWA) and three workers filed a class action lawsuit against T-Mobile US, Amazon.com, Inc. (Amazon), Cox Communications and Media Group (Cox), and hundreds of other large employers and employment agencies who allegedly engaged in the unlawful practice of excluding older workers from receiving job ads on Facebook for open positions at their companies. The lawsuit, which challenges how Facebook’s paid ad platform is allegedly being used to hide job ads and opportunities from older workers nationally, has been filed in the U.S. District Court for the Northern District of California.”

You can find their press release by clicking Class Action Lawsuit Hits T-Mobile, Amazon, Cox and Hundreds of Large Employers for Allegedly Using Facebook to Exclude Millions of Older Americans from Job Ads in Violation of Age Discrimination Laws

In there you will also find:

When you click “here” you get to a 44 page complaint. You likely will find that interesting. You then get 64 pages of job ads they have taken screenshots of including Amazon, Facebook and Triplebyte : 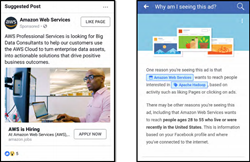 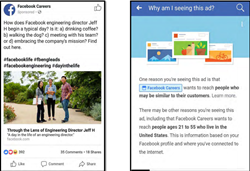 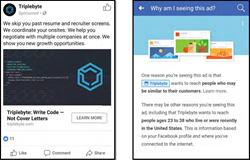 As we have gone through today a number of news sites have picked up this story. What is shocking to me is that a number of companies are saying they were not aware their recruiting team was doing this.

If you say you don’t know that you can target ads on Facebook (most sites) on a number of criteria including age you are lying or not qualified to be in the role you are in.

This will be something to watch in the coming months.