Survey: Minneapolis And Midwest IT Hiring To Increase 2nd Half Of 2017

Hiring in Minneapolis / St Paul and around the Midwest will continue to heat up the 2nd half of 2017 according to the latest Robert Half Technology IT Hiring Forecast and Local Trend Report. The data mirrors the conversations across the region I have been having.

There may have been a plateau to small increase in the winter and early spring as people figured out what the November ’16 election was going to mean for business. In May and June there was a noticeable uptick and it seems to be carrying through the summer months.

I doubt we will see much of a traditional summer slow down.

Here are the numbers from the Robert Half Survey:

I would have thought that last number to be a bit higher. Maybe the many employer branding initiatives going on are having a good impact.

Why all the tech hiring?

There are “top concerns” listed and tied for #4 at 17% is retention.

If 24% will increase hiring and 60% are filling vacant roles… how can only 17% be concerned about retention?

Folks… that math does not add up. Some CIO’s have their head up their “cloud”.

Minneapolis and St Paul are not alone in this as most of the Midwest is recruiting hard.

Which gets me to this USA Today article After Trump: Techies 'boomerang' to Midwest to spread wealth.

While I agree that a “boomerang” to the Midwest is happening I totally disagree with the why in the article. This was happening long before the current administration took office. 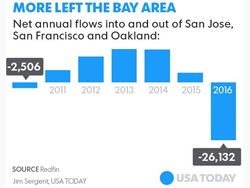 Tech start-up clusters like this one dot the Midwest. From Pittsburgh’s Shadyside near Carnegie Mellon University to Cincinnati’s Over-the-Rhine and Old Market in Omaha, Neb., older urban neighborhoods are being revived and turned into mini tech meccas. Near Target Field in Minneapolis, where the Minnesota Twins play, abandoned brick warehouses have been retrofitted for start-ups.

Sure there are pros and cons to doing a startup in the Midwest just as there are in Silicon Valley and the Bay Area. What was the biggest barrier in the Midwest… access to capital, is not much of an issue anymore.

You used to have to be physically close to technology in Silicon Valley. That's no longer the case. You can build and deploy technology anywhere.

If you are reading this outside of Minneapolis and St Paul and are curious about what is going on here and around the Midwest send me an email and we can start a conversation paul@mnheadhunter.com


Click Minnesota Headhunter for current blog posts and Minneapolis IT Jobs for searches I am working on.

Posted at 08:54 AM in Minnesota Business and Technology News | Permalink | Comments (0)