Minnesota Morning | phData, Sportradar And US IT Employment

Yesterday I was in the Lake Minnetonka area, Minneapolis west suburbs, and found myself day dreaming about #LakeLife summer days. I took this photo imagining it to be 80F and in June. Good news… days are noticeably getting longer now and winter is more than half over.

Tech.mn has an article Minnesota’s Big Data Bros Are Crushing It on Brock Noland and Mac Noland (@mcdonaldnoland) co founders (and brothers) of phData. I have seen, but not yet met, them at CoCo.

It’s an interesting story about the evolvement of Big Data and growth of a Minneapolis tech company including this:

“Two years after inception, phData had acquired around 20 customers across the Midwest and is managing the data of multiple Fortune 500 companies in various industry sectors, including retail, finance and medical device.”

SportTechie has an article The Evolution Of Sportradar. Sportradar acquired Minneapolis based SportsData a few years ago and the office here has continued to grow. (Disclaimer: SportsData was a client):

“The acquisition of SportsData (2013), allowed us to enter the US market and set the stage for deals with the NFL, NBA, NHL and NASCAR. These league deals will allow us to extend our product offering even further.”

If you are into sports, data and technology this is a fun read. 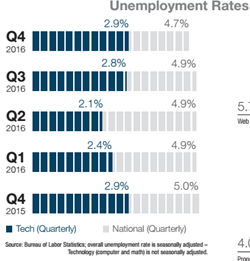 Dice.com has some data on 2016 US IT hiring Tech Unemployment Held Steady in Q4

While the unemployment rate was at its highest point of the year it is only back to where we ended last year. Given the number of announced layoffs around the country… those of us who said tech pros would find a a busy hiring market were correct.

And yes the Bay Area is seeing some people exiting. As they move to other regions they are finding plenty of companies, jobs and roles to choose from.

My “prediction”… we will continue to see some churn on the West Coast and those impacted will continue to find new roles out there or in other parts of the country. I expect the unemployment rate to go up/down .3% from where we are now through 2017.