Home Work With Me IT Jobs Recruiter Jobs Minnesota Talent Leaders Job Search Advice Speaker Press Minnesota Tech Contact Me
Minnesota IT Jobs: Do We Have Enough Talent In Minnesota?
Survey: 20% Of IT Pros Are Not On LinkedIn… Some Thoughts

Minnesota IT Jobs: How Stiff Is The Recruiting Competition From Silicon Valley?

That was part of an IM with CTO a couple of weeks ago after one of his senior developers gave his two weeks notice. He is leaving for Silicon Valley and Facebook.

With there being a number of these stories the past 24 months a lot of locals, from recruiters to CEO’s, are concerned with the “exodus” to the West Coast.

As I noted in my Minnesota IT Jobs Report (video posted below) we have had a number of Silicon Valley, San Francisco and Seattle tech companies recruiting here. This is a slide as an example of Amazon’s activity here (click to enlarge): 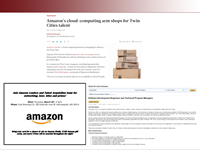 Look… if someone wants to go to Seattle and work at Amazon they will. Sure their recruiting here likely expedites this but sooner or later they are leaving.

While it is jolting to hear your senior developer is going to work for Zuck… who cares.

And it does prove that Minneapolis does indeed have some talented people here.

The “big issue” many large local companies have (read that as old, slow, not fun, soul sucking) are the startups here in Minneapolis.

There are a number of startups who are growing at a high rate of speed and most of their candidates are coming from Eden Prairie, Lakeville, Woodbury, Maple Grove… you get the point?

If a startup is at 15 employees and heading towards 60 in the next year or two most of their hires will be from our area. Now take that number and multiply it by say… 10 local startups (I like round numbers).

Add in a group like BuzzFeed with their Minneapolis office already to 30 employees.

Best information I have is Amazon has pulled <20 from Minnesota in the past 18 months.

Can you compete with West Coast tech companies?

Who cares… your greater competition is in your backyard, around the block, in Lowertown and the North Loop.