Minnesota IT Jobs And Unemployment Q1 ‘15

Q4 ’14 I held a number of roundtables with Minnesota Recruiter and HR colleagues to talk about recruiting, IT jobs and salary statistics. I do this every Q4 and it allows us to share information, confirm and/or question what we see going on from our corner of the community.

Last year most of the discussions were held in mid-December and a few of us mentioned that it seemed that a lot of IT pros were moving around to new companies or going on their own as consultants.

Some said they did not see it.

As 2015 has progressed many Minnesota Recruiter and HR colleagues have been talking about it. “Churn” is a word many of us are using and most say that it started around December 1st.

And we are seeing more of it.

At MinneBar 10 (April ’15) it was very noticeable when talking to Developers. Quite a few had made a move since December 1 ’14 and more were talking about doing it this spring.

Dice has an analysis with BLS (U.S. Bureau of Labor Statistics) numbers and they show an uptick in the number of “Voluntary Quits” in Q1 2015 from Q4 2014: 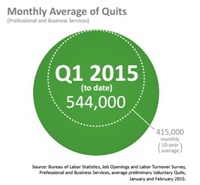 Last week I was invited to a CxO roundtable to give an update on Minnesota IT jobs this spring. After a 25 minute summary and almost 30 minutes of Q&A… I was a bit stunned at how out of the loop the group was.

They were fully aware that there is competition for IT pros but they were shocked with what I was saying.

“Updated a group of CxO's on Spring '15 MN IT Jobs & Hiring. Surprised at the numbers. I was surprised they were surprised.”

In the previously mentioned Dice analysis are these unemployment stats: Locally we have been <2.0% for years. Let me say that again… years.

So yeah, I am surprised anyone is surprised.

Last year at this time I started working on what became this:

I’m thinking I will take the info from these sessions and create a 2015 version.