A Minnesota Recruiter’s View On Rebranding Minnesota, The Startup Community

Luke asked what is the difference between Silicon Valley and Minnesota startups. I tweeted something like, “In Silicon Valley, they stand up on their chairs and scream. In Minnesota, they whisper.”

Minnesota Startup Community: The Time Has Come For Less Talk and More Walk

Most, however, are doing nothing more than they did two years ago, and it will not surprise you that I think that is a losing strategy.

So take a step back… think about how your company is doing in recruiting new team members and ask yourself this question… how are you doing?

Are you competing and being aggressive?  Or are you sitting back, waiting for folks to come to you?

If the former, congratulations and keep it up.

If the latter, good luck. You will need it.

The War for Talent: Are Minnesota Tech Companies and Startups Ready?

Why am I going down memory lane?

This weekend at MinneBar 10 there will be a couple of conversations I am looking forward to:

I have a lot of respect for the folks leading these sessions and while they will be talking from their analyst, investor and tech entrepreneur view I am going to give a recruiter view here.

Also… this way I can get this out of my head now without going off on a long tangent or soapbox tomorrow.

Starting with the tech community and the quote/link above…

While we still have a long journey ahead of us, we have come a long, long way in the past 5 years.

Just since Labor Day ’14 we have had Twin Cities Startup Week (with a bunch of events), Minnesota Cup, Rise of the Rest, a packed Guthrie Theater for MinneDemo, Midwest Capital Call, EnterpriseRising and now MinneBar 10.

That does not include all of the tech/user group meetups and events that do not come immediately to mind.

Tech.mn is not a new site any more and pushing out great content including the Candor Series. The fellas at Minnov8 are still doing their Saturday podcast. The MSP Business Journal is easy to work with to get stories out. And the Minneapolis StarTribune has really stepped on their coverage of the Minnesota tech scene.

CoCo (where I spend at least a 1/3 of my time) has grown significantly in space (Grain Exchange and Fargo), membership and programming including the Google for Entrepreneurs relationship.

ADDED: and we have two or three “code schools” or “code bootcamps” too.

We need to be an actual living and breathing community.

People have taken action. We have communicated better. We have more events (very well attended). We are sharing more.

We do have a living and breathing community.

What I hope is another 5 years from now when I read this post I hope I can recalibrate and say that those future days are an “8” and the “7” of today was actually a “5”.

Yeah, I am still a glass half full guy.

And yes, my beloved Gophers football team is much, much better than 5 years ago.

When I think about recruiting, the second link above… I think we have some tech companies and startups, maybe up to 15, who are aggressively recruiting. They have a strategy and they are going after it.

Generally though... most groups are still very passive.

They talk about the “War for Talent” and a “skills shortage” but frankly they wouldn’t know. You can’t talk about those things if you are not actually trying to recruit. It’s an excuse many groups are using and frankly I am tired of hearing about it.

Side note: over the past year I have done a “Recruit Like A Startup” presentation for Google for Entrepreneurs, Twin Cities Startup Week, out of state at the Michigan Recruiters Conference and yesterday at the Minnesota HR Tech Expo. I am not doing it at MinneBar 10 like I have last years. I did this week post a <15 minute presentation:

Recruiting For Startups: The Basics

We do, my opinion, still lack an identity locally, regionally and nationally.

I am not a fan of “Silicon Prairie”. Why would we even try to sound like Silicon Valley?

I wrote this back in November:

Rant: Thoughts On Rebranding And Attracting Workers To Minnesota

And had a couple of quotes on NPR:

I wish I had recorded my conversation with NPR because I laid it all out why I think it is a bad idea. Not the idea of finding a brand or identity but “North”. To be brief:

I don’t think embracing the cold… an igloo lifestyle helps us. In my experience it has the opposite effect.

We should be marketing and branding all of what Minnesota has. Similar to what Explore Minnesota does. They promote 4 seasons along with all the activities and areas of the state.

So too should any job, technology and economic branding.

And let me be really, really clear… “Silicon Prairie” and “North” will not fix what I think is THE fundamental problem here in Minneapolis and it’s in that first quote above:

“In Minnesota, they whisper.”

Until we get past whatever Scandinavian upbringing many of us had and the area has adopted… you know the one: it’s not polite to promote yourself, it WILL NOT matter what we call ourselves.

A couple of interesting pieces the past two months…

Likely you remember seeing The Atlantic article The Miracle of Minneapolis. While there were a number of counter articles regarding racial disparity (very true) it does not change the premise that particularly for those folks tech companies are looking for… this is a great place to be.

We just need to talk about it.

I have heard lately from people in Minneapolis that we need to get out of the shadow of Chicago? Shadow? What shadow?

Chicago is not our “competition”… the west coast is. And then Seattle, Austin, New York and Boston to name a few. Toss in Denver too.

The Metropolitan Planning Council in Chicago has a three part series this spring. Here is Part 2:

Why is Minneapolis growing almost five times faster than Chicago? It's not the weather.

I’m not afraid of Chicago.

There is a common belief that Minneapolis has a brain drain to San Francisco and Silicon Valley. That’s true in part.

We see (fill in the blank name) from (local tech company) is moving to (pick a west coast city). And we get all bummed out that we “lost another one”.

It goes both ways, you get that right?

People do leave the west coast for other parts of the country to have an affordable home, start a family, get married, have a lower cost of living, start a business where taxes are lower and/or a less congestive environment.

We have a large number of former San Francisco and Silicon Valley workers in our area. It’s just that no one knows them yet… there is no “fanfare” when “Jane Doe” leaves her startup in the valley to have a home and backyard in the Midwest.

LinkedIn released this graphic at a recent Greater MSP event: 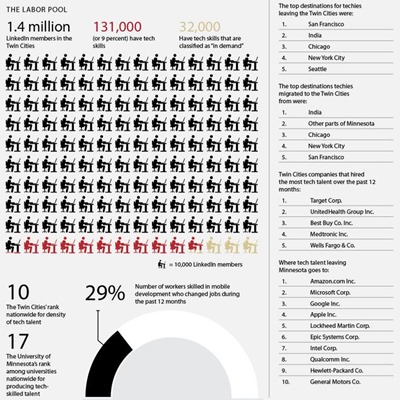 I am not surprised by any of the data on this graphic.

Finally… at every HR and Recruiter event I go to ask I my colleagues if they know about this rebranding thing, more than half do, and what they think about it.

We need to do something starting with just being more vocal about who we are and what we are doing.

And if we are going to start down the path of finding a brand… I hope some recruiters are allowed in the conversation. Some of us have experiences and at least anecdotal evidence or statistics to back it up.

I look forward to the conversations tomorrow and I will do my best to not get on the soapbox. And if I do I promise to make it short.