Above is the calm before the CoCo Pitch Night storm.

A standing room crowd of around 200 attended… I had never seen that many people in the garage before. This photo was taken 20 minutes before we started:

12 startups from the CoCo community, 10 from Minnesota and 2 from North Dakota, presented: 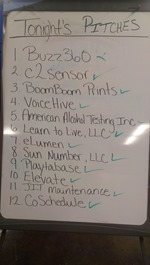 A number of the pitches were really, really good.

The Top 2 as voted on by the crowd and who are then forwarded to Google Demo Day for consideration:

An observation… I did not know or recognize at least 70% of the crowd. I am taking that as a good sign of what is going on in our area.

A couple of days ago the Minneapolis StarTribune posted this article, Minneapolis schools awarded no-bid contracts to Memphis IT company (may require subscription) and I found a number of things to be odd.

Odd as in I hope someone can spend more time digging in to this:

The then district CIO had worked with them previously in Memphis

What??? => “Valerga said the district couldn’t perform its basic technology functions when he arrived, despite having a $13.7 million annual technology budget and 68 employees.”

What???=> “He identified a lack of trust among employees and staffers who did not want to share key information with him, such as the location of vital software applications.”

And this one has me most curious…

So if they had local IT pros doing the work… what makes them so special that no Minnesota IT consulting group could not do this?

As I said… I hope someone digs into this further.

Pursuit of Happyness was on TV this weekend and I watched for what has to be at least the 12th time. I love this quote from the movie:

And these two from Chris Gardner:

“The cavalry ain’t coming. You’ve got to do this yourself.”

“One of the things young people always ask me about is what is the secret to success. The secret is there is no secret. It’s the basics. Blocking and tackling.”