minnedemo 19 Will Have 7 Demos Including ToggleGreen

While prepping to write this I went to the minne* web site and on the wiki at the time was this:

I learned a few minnebar’s ago to bring a power strip. Not only do I always have my devices charged… I for a short time become a few folks best friend.

minnedemo 19 is next week (Feb 5th) with 7 groups presenting including my friends at ToggleGreen (@ToggleGreen). See this post from last month:

ToggleGreen Adds Paul DeBettignies To Its Advisory Board

I posted this photo a couple of weeks ago and said it was a late Sunday night at ToggleGreen working on a product demo: 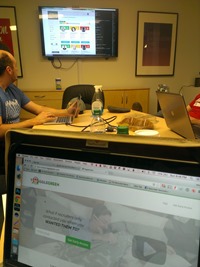 I guess that was sort of true… the product demo we were working on was the video submittal for minnedemo. Clearly we did OK.

Besides ToggleGreen here is who is presenting:

Continue reading "minnedemo 19 Will Have 7 Demos Including ToggleGreen" »

I blinked… and January 2015 is almost over? What happened? Where did it go?

It had been a few months since I attended the Ruby Users of Minnesota meetup so I stopped by the other night. I find myself still saying “Happy New Year” to friends I have not seen since “last year”. Not awkward I hope.

There were two presentations.

The first from Kevin Bullock (@krbullock) who did a DevOps 101 He did a great job breaking it down into what it is, how to do it and managed some conversation on how to avoid pitfalls.

6 simple words Aaron Kardell, CEO of then Mobile Realty Apps now HomeSpotter (see the press release below), said to me at the first MobCon late fall 2012… and things have not been the same since.

I knew Aaron from seeing him at CoCo Downtown Minneapolis and I knew of him through tech events in town. I knew he was a good tech guy and this being his third startup (two successful exits) a good CEO.

He said he was going to be growing his team and he wanted to know if I had interest in helping him.

As I remember it I did not let him finish asking the question before I said yes.

Aaron and Mobile Realty Apps have come a longgggg way since then.

They started at CoCo St Paul… I don’t have any photos of them there.

Last week FOX 9 broke a story that late in December (2014) 40 people who had accepted job offers to work at Target Corporation starting in January (2015) were notified that their offer was being rescinded.

Their story and an interview with a local attorney is below.

I missed the story that night and was not aware of the situation until a couple of friends who had accepted offers at other companies were asking about the enforcement of their offer.

I finally asked why they were asking and learned of the story.

I’m not an attorney (so this is not legal opinion)… generally offer letters are a formality. They usually contain specifics like a start date, salary, vacation and benefit information, at will employment and other things.

In the FOX 9 story the attorney says that employers rescinding offers is a common thing.

That is not my experience.

I have had an equal number of candidates who have accepted an offer and then not shown up for the first day of work. Sometimes without notice.

So this does go both ways.