Conversation With A Java Developer… Should I Learn Ruby On Rails?

During MinneBar a Java Developer tapped me on the shoulder and asked if I had a couple of minutes to give her some career advice.

What she asked is a common question right now with Java and .Net Developers:

Should I learn Ruby? (I think she was really asking should she become a Ruby Developer)

A simple question with a not so simple, short answer:

The easy answer is yes. Well, maybe. It depends.

The IT Recruiter in me who works mostly with startups and tech companies wants to say:

Yeah and what are you waiting for.

But it is not that easy.

Do I think that developers should learn new languages?

Continue reading "Conversation With A Java Developer… Should I Learn Ruby On Rails?" »

How Much Do Recruiters Make?

A few weeks ago I posted Minnesota Recruiter Contract Rates Spring 2014 and received a number of email from search firm owners and recruiters wondering about salary and bonus plans.

I had some basic information and it turns out… my numbers were high. At least when compared to the Bullhorn Money Talks: The 2014 Compensation Report (free - registration required).

Maybe my Minnesota colleagues make more… or maybe they are fudging, I don’t know. A little bit of both is my guess.

There is a bunch of good information that search firm owners, search firm recruiters and sales pros will want to see including average salaries by:

Here is the Average Compensation By Role for all respondents (other numbers are higher): 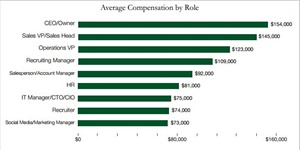 Continue reading "How Much Do Recruiters Make?" »

This position has been filled.

IT Contractors… How Long Are You Locked Up For?

Jerry Albright (@Jerry_Albright) a colleague of mine, CEO of Professional Search Group in Indiana, has a Facebook group for Recruiters (those of us who make placements) and we share stuff about what is going in our business. Today he posted something that if I were an IT contractor… I would want to know about.

When Jerry submits “Moe” for this other gig “Widgets, Inc” says “Moe” is locked out for opportunities there for 12 months.

Continue reading "IT Contractors… How Long Are You Locked Up For?" »

The following new Minnesota IT jobs have been added on the Minnesota Non Profit IT Jobs page:

I had a conversation with a Director of HR and they asked me to look at their new career site and tell them what I thought.

It looks good and to me a big improvement over what they had before. And I was curious… if, how has traffic changed?

“We don’t track that stuff”

And I thought to myself and then said out loud:

Last week I had a post on ERE.net (posted below) and received some push back, mostly in private, from my colleagues. Some thought I was too harsh with my tone.

I also received a few email from IT pros saying I should have been more harsh. A couple sent me content for future Recruiters Behaving Badly posts.

As usual it seems that those “offended” are not the offenders… eh, so it goes.

“If you were receiving this would you reply”

Informal Survey: 1 In 10 IT Recruiting Inquiries Do Not Suck

Business Insider used the Fortune 500 and info from Payscale to create 50 Best Employers In America.

Headquartered in Minneapolis, this electricity and gas company has 12,000 employees.

Median pay is $80,600 after five years and high compared to industry peers.

CareerCast has ranked 200 jobs from best to worst for 2014 based on Environment (emotional and physical), Income (growth potential), Outlook (employment growth and unemployment) and Stress.

Here is what they came up with:

A really good guy I have known for many years, “Startup CEO”, was wondering if he was over reacting to the following scenario:

Startup CEO was introduced to an entry level “Developer” going through a career change by a peer at a local consulting group.

CEO and his team had a couple of in depth interviews with Developer. They wanted to make sure Developer was going to be able pick up writing code at a decent pace. And they were more than willing to train him along the way.

This was a win-win for both parties.

CEO calls up Developer and gives him an offer. They cover salary, benefits and “woo” him a little.

Developer tells CEO he has another offer. CEO says he understands and needs to have a decision in a couple of days.

Developer sends a short email to CEO saying he has taken the other offer.

This week MNTRN (Minnesota Technical Recruiters Network) is hosting Terry Petra. This will be my first time meeting Terry and I am looking forward to it. He has a great reputation as a trainer and I am going to ready to take some notes.

This fast paced, action packed program will show you how to get top results regardless of economic uncertainties! We’ll begin by taking a look at the differences between those who succeed by making a positive difference from those who do not, while keeping in mind “The Success Question”.

There is a bunch of news the past two weeks with Minnesota startups and I am posting the ones I know about. I think I am missing a few so if I am send me a note so I can write about them too.

MinneBar (@MinneBar) is next week, April 12th at Best Buy HQ’s. While not focused on startups there are a number of sessions relating to starting one, running one and going to work for one.

I am doing two sessions.

Managing Your IT Career v6

Last year I had some thoughts and slides prepared and decided to simply ask:

“What do you want to know?

And the first question that drew loud laughter was:

“Why do recruiters suck?”

From conversations I have already had I expect this to be a fun session and pick up where I left off.