After a couple of weeks of being able to fall asleep at night… last night was not such a good night. I went to bed well after midnight  and woke up well before the birds started chirping.

So no words of wisdom or funny things to say today…

The middle of the month is always a busy time for different economic reports and there were a bunch of mostly good news last week highlighted by:

- Initial Jobless Claims: March 10th the Labor Department reported 351,000 people filed for initial unemployment benefits. That was below the average market predictions of 355,000 and down from the revised number of 365,000 claims the previous week. The 4 week moving average was unchanged at 355,750.

Ongoing claims were 3.343M much lower than predictions and lower than the 3.424M.

- Philly Fed: March 15th the Federal Reserve Bank of Philadelphia released their general economic index. 12.5 was the number in line with predictions and up from 10.2 in February. This is a positive indicator with manufacturers putting out more products which tend to lead to hiring more folks. The New York index was also a positive report.

- The Thomson Reuters & University of Michigan preliminary index of consumer sentiment dropped to 74.3 from 75.3. 76.0 was the average prediction. Gas & fuel prices are most to blame for the negativity.

Check out The American economy: Unmired at last (The Economist)

I am seeing this phrase (popular from 2003-2007) more and more as the economy continues to recover. For those of us in I.T. this is not news and is more like “where have you been” kind of news.

Today on ERE.net is this article The War for Talent Is Returning; Don’t Get Caught Unprepared from Dr John Sullivan.

I am not a big fan of the words “war” and “talent” but it is the phrase the industry uses.

It is always easy to use Silicon Valley as a place to talk about the “war” but here in Minnesota when it comes to recruiting I.T. folks we have definitely seen the increase in competition to hire moving past a “skirmish” but not quite a “war”.

This is the Gophers third NCAA Championship with the most recent in 2005.

Check out the post on GopherSports.com Gopher Women's Hockey Wins National Championship where you will see a lot of information about the game including this video: 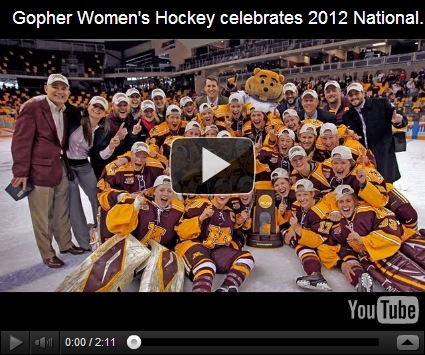 This still shot is currently the splash page on the Gophers web site: 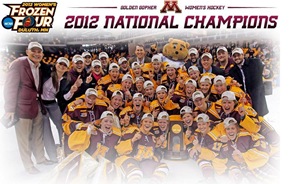