LinkedIn Is A Great Tool, But I Am Not Buying The IPO Hype

Let me be clear about this:

- I am a HUGE fan of LinkedIn. It is a great tool for recruiters, job seekers and those (which should be everyone) who are looking to maintain their professional network.

- I am a HUGE fan of social networking and social media sites including LinkedIn, Twitter, Facebook, etc

- I have had a paid subscription to LinkedIn for as best I can remember two years.

- I am a client of Monster.com

OK, I needed to get all of that out for these next thoughts starting with:

I call BS on the hype of the LinkedIn IPO.

Yes, this is a good company, in a niche that it mostly owns, with a revenue stream that provides good value to its customers.

One should be wary when analysts start talking about bubbles, Prince and partying like it is 1999.

The difference of course between LinkedIn and Pets.com (or enter any dot com IPO of the 90’s) is that it has users and revenue streams.

So I am going to talk about why I think the hype does not match the reality and for the sake of sticking to what I know will not be talking about price to sales, P-E, price to book, price to earnings. Find that online or from a broker.

To what I think I know…

Users, let’s talk about them for a moment.

CNBC has had a graphic today (May 20th) that says LinkedIn has 100 million engaged users.

WHAT??? Where did they get that stat from? LinkedIn says 100 million profiles. Now do some math. How many profiles are orphaned, not been accessed in the past 60 days, etc? It has to be a chunk, maybe 20%? I would guess it is more.

Revenue streams, let’s talk about them for a moment:

As the economy slowly improves we can assume that fewer job seekers will be buying the premium subscription.

We can assume more recruiters will buy a premium account and some employers the recruiter product.

I am not smart enough to talk about traffic and ad revenue.

My point is this, fewer folks creating new profiles or checking on their current profile because of a better economy has a growing employer base contacting a barely growing candidate list.

Side note: But Paul (you are thinking), LinkedIn is adding a new profile every second. Yes they are. How many of them are in the U.S.? How many of them stick with the site? This is the same hype about Twitter. That “x” number of profiles are created never to tweet again. This may not be as much of an issue for LinkedIn but still an issue.

We are already seeing folks in some skill sets frustrated with the amount of recruiter spam they are receiving. That is only going to get worse.

Question: How many millions of folks were hired last month in the U.S.? If you believe the IPO hype it was most.

What a bunch of crap…

Speaking of traffic there a number of stats one can find on users of the social network sites. I am linking to A Look at LinkedIn Users 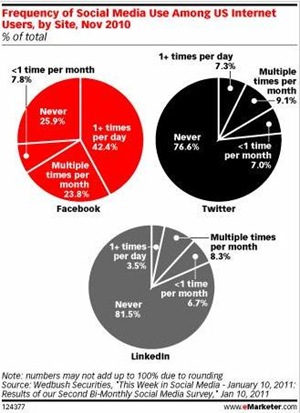 Hmm... those user numbers look pretty slim for a nearly $10B company.

As a recruiter, as a paid subscriber, can anyone name me one thing LinkedIn has done in the past 18 months to make this a better tool for me? I can think of a few things they have done to make it less user friendly.

I guess I can hope that having all this cash we will see new things but I am not holding my breath.

Who are the winners of this IPO:

Finally, let me call out my Recruiter and HR blogger friends. Where are they on this? They are quick to rant about influence ratings, promote their next speaking gig and talk about HR tech products.

But no conversation on LinkedIn.

If they think this is awesome I would assume they would have been saying so. But nothing. So does that mean they think (to some extent) like I do?

Because most of you by now think I am anti LinkedIn I am not.

I am anti hype.

What I am is not sniffing the Kool Aid straight from the package like most and actually adding water to dilute it a bit.

Would I buy the stock? Yes, but at a much lower price and for a long term hold.

Would I buy on the hype? No.

Would I buy after the price comes down to earth and as a long term play? Yes.

Well said Paul. Media (& the market for that matter) are looking for something, anything positive to shout from the rooftops. Is it a sign that things are stabilizing? Yes, thankfully. But to some, it's just too fun to talk about.

Especially those in recruitment marketing & advertising. (wipes off red mustache)

There is potential upside and there is potential downside, no one can be sure. What is for sure is that LinkedIn is now on the map in a big way. I would love to see the study of deceased, untouched, duplicate, and garbage profiles of the 100 million – 20% is a fair guess. I’d also like to see a study of the average LinkedIn user and their knowledge of LinkedIn’s various revenue streams. Is the average IT Pro or Engineer aware that recruiters can buy access to the entire network? All that aside, the past two days were certainly a positive moment for an exciting tech company and I’m interested to see what is upcoming.

Linkedin, facebook, twitter are so popular that people cannot live without it anymore (some). Also there are people i know who have only an account with one connection or friend. Are those old fashioned?? Time will tell. But very nice suggestions you made here!