Taking a break from the usual stuff to drop in the sad news of the passing of Murray Warmath. 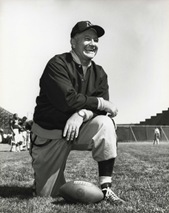 Here is a press release from the University of Minnesota:

Legendary University of Minnesota football coach Murray Warmath passed away Wednesday at age 98 in Bloomington, Minn. Warmath led the Golden Gophers to a national championship and went to two Rose Bowls in his 18-year tenure with Minnesota.

Warmath had been a resident at Friendship Village, a retirement community, for the past eight years. His death was due to natural causes.

Warmath became head coach at the U of M in 1954. His team that year featured All-American halfback Bob McNamara and quarterback Gino Cappelletti who helped lead the Gophers to a 7-2 record.

Six years later, his squad went 8-1 and was named unanimous national champions after the conclusion of the 1960 regular season. The highlight of the 1960 season was the seventh game of the year in Minneapolis against No.1-ranked Iowa. The Gophers were ranked third in the country going into the game. Minnesota won soundly 27-10 led by the two-way play of All-American guard and Outland Trophy winner, Tom Brown. The next week visiting Purdue upset Minnesota 23 -14 and the Gophers dropped from the No. 1 ranking in the country. However, in the season finale, the Gophers beat Wisconsin in Madison 26 -7 and were back on top of the polls.

Shortly afterward they accepted the first invitation ever for the school to play in the Rose Bowl, which they lost to Washington 17-7.

The 1961 team went 7-2 losing the season opener to Missouri 6 - 0 at Memorial Stadium in Minneapolis and the season finale 23-21 to Wisconsin. Even though Ohio State was the winner of the Big Ten championship, the Buckeyes turned down the offer to play in the Rose Bowl so the invitation was extended to Minnesota. The Gophers returned to Pasadena for the 1962 game and soundly beat UCLA 21-3. All America quarterback Sandy Stephens was named the game's MVP. Stephens was the first African-American quarterback to be earn All-America honors.

Warmath's 1967 team shared the Big Ten title with Purdue and Indiana with an 8-2 record.

Warmath's last season was 1971. He then became an assistant athletic director as well as the color commentator for football game broadcasts on WCCO-AM radio with long time play-by-play announcer, Ray Christensen.

Warmath returned to football in 1978-79 as the defensive line coach for the Minnesota Vikings under Coach Bud Grant. He then worked as a scout for the Vikings until the mid-1990s when he retired from the game due to declining health.

Murray Warmath was born Dec. 26, 1912 in Humboldt, Tenn., the only child of Carl and Imogene Warmath. He played high school football at Humboldt High School and then enrolled at the University of Tennessee where he played under legendary coach Bob Neyland. Warmath was on the Volunteers teams for the 1930 through 1934 seasons, receiving a medical redshirt in 1931. He was named a third team All- American end in 1932. In 1934, as a guard, he was Tennessee's only All-SEC player.

While at Knoxville, he was a teammate of the legendary halfback Beattie Feathers and played against Paul "Bear" Bryant from Alabama. As an undergraduate, Warmath was elected student class president and began dating his future wife, Mary Louise Clapp, who was the school's homecoming queen.

Warmath became an assistant coach for the Volunteers in 1935. In 1939, he accepted an assistant position with new Mississippi State coach Allyn McKeen and was on the staff for three years that are among the most successful in MSU gridiron history.

Warmath was an officer in the U. S. Navy during World War II.

He returned to Knoxville, Tenn. for the 1946 football season to join Neyland's staff and was there through the 1948 season before leaving to go to Army under its famous coach, Earl "Red" Blaik. While at West Point, he was on the staff with Vince Lombardi.

In early 1951, Warmath interviewed for the Minnesota job but then withdrew his name for consideration. In 1952 and 1953, he was the head coach at Mississippi State, where one of his assistants was Darrell Royal who went on to become the great coach at Texas, beginning in the late 1950s.

In January of 1954, Warmath was named head coach at Minnesota, replacing the retiring Wes Fesler.

He was the 1960 National Coach of the Year and in 1968 was the president of the American Football Coaches Association. He was the 1991 recipient of the General Robert Neyland Trophy.

Parker was the 1952 and 1953 MVP of the Southeastern Conference and Tom Brown and Sandy Stephens were the Big Ten MVPs in 1960 and 1961 respectively.

Warmath coached three All-SEC players while at Mississippi State and 23 All-Big Ten Players during his tenure with the Gophers. Four of his players at Minnesota were Academic All-Americans.

Three of his former players -- Bell, Eller and Charlie Sanders -- are members of the Pro Football Hall of Fame.

Funeral arrangements have not yet been announced.

Stay in touch with me by clicking Blog Posts by RSS, Blog Posts by Email and/or the From The Desk Of Paul DeBettignies Newsletter