Home Work With Me IT Jobs Recruiter Jobs Minnesota Talent Leaders Job Search Advice Speaker Press Minnesota Tech Contact Me
Reaching For The Brass Ring In Job Search
Mid-Life Career Changes: What You Need To Know To Beat Out The (Younger) Competition

So I still have not figured out what to do with Gopher The Roses (Gopher Football Blog) and I have not posted any information here since the firing of Head Coach Tim Brewster.

Heck, come to think of it I have not posted any coaching news speculation and now things are getting really crazy with rumors.

Not because I have no interest but a lack of time.

But… last nights victory by the Minnesota Golden Gophers over the Iowa Hawkeyes that brings back Floyd Of Rosedale has me jacked up 24 hours later.

Here is a Floyd Of Rosedale photo:

So no analysis of the game although I will make a point to do in the next day or two.

Just some photos and video of the players, coaches and thousands of fans taking the field in a big celebration.

Coming out of the 4th Street Ramp I always like seeing this group of tailgaters:

I try and remember to take scoreboard shots after we score:

MarQueis Gray on the bench after his touchdown run:

And then for some reason I did not take any photos until the end of the game. It was equal parts: intensity of the game, I was Tweeting on @Gophers and my camera was getting cold and not operating quite right.

Here are some photos of the on field celebration (a couple are blurry):

There are plenty of photos and video on GopherSports.com including this one I like best of Adam Weber getting a lift from his team:

Here is the video I have of the end of the game taken from Row 4 behind the Gopher bench as the players, coaches and fans stormed the field (both times): 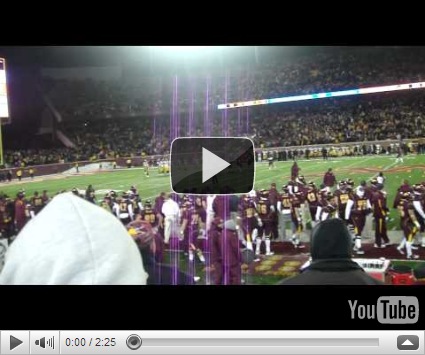 What had been a rough season ended on a much needed high note. As a long time Gopher season ticket holder and alum I am thrilled that these players and coaches were able to go out on a high note and bring back Floyd Of Rosedale where he belongs.

Until next year… Go Gophers!!!