US Job Growth An Ongoing Concern

I still need to post a bunch of employment statistics from recent weeks and with this post am jumping ahead a bit.

This afternoon I had a long chat with a reporter who was curious about why my optimism about job growth was so low.

Sure it is likely we are out of the recession, corporate profits are up and some temporary hiring (a forward looking indicator) has started but we have a long, long way to go.

Here is a recent chart of job losses and duration by recession: 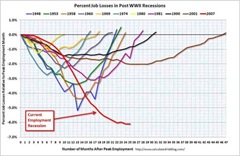 When the February jobs numbers are announced we will likely see positive job growth. And we will see reporters talking about the good news and the politicians will celebrate. Which I find ironic, how many jobs has a politician ever really created?

Anyway, here is the concern. The average number of jobs the US economy needs to create every month to keep pace with population growth is around 100,000.

According to Council of Economic Advisers annual Economic Report of the President released a couple of weeks ago we can expect the following job growth:

Depending on the numbers you look at around 8.4 million jobs have been lost during this recession.

Other numbers suggest 12 million to 15 million are looking for full time work.

Regardless of which of these numbers you look at jobs are going to be an ongoing concern.

My advice: you better keep your skills current and your network strong. You may have a job today but unlike previous times if you lose it you may not have a new one as fast.