NEW YORK--(BUSINESS WIRE)--As globalization shifts corporate priorities, mobility and flexibility will be required for even star executives, as prospects for senior management often shift from the West to the developing world, according to the quarterly Boyden Executive Outlook released today.

“CEOs can come from any market due to the globalization of business,” said Chris Clarke, President and CEO of Boyden World Corporation. “Many of the best opportunities are shifting away from the West, while changes in government policy and taxation are making corporations consider locating operations in countries with less restrictive policies.”

This is Part 3 of a 3 part series on how a VP Marketing at a Minneapolis company became an Undercover Jobseeker to apply for a job at her own company.

Part 1: Why The Undercover Boss Should Be An Undercover Job Seeker Part 1 Of 3

Part 2: Why The Undercover Boss Should Be An Undercover Job Seeker Part 2 Of 3

Julia calls a management and HR/Recruiter meeting for Friday morning that in hind sight should have been done in another way. Rumors of a layoff were all over the place.

The following is a summary of the meeting:

Julia started the presentation with a slide deck that documented what she had done the previous six weeks during which she did not pause, stop or take any questions.

At the end of the 20 minute presentation she asked if anyone had a comment to make but the room was eerily silent to the point that no on had yet shifted in their chair.

Julia then brought up a spreadsheet documenting the estimated “cost” of the open position along with a scenario if the employee with the offer had left along with if contractors were brought in. The numbers were really big. Julia then showed a spreadsheet of a conservative estimate of the total cost to the company if this was happening with one out of ten jobs.

This is when the shifting in the chairs started.

The rest of the meeting along with subsequent department meetings highlighted issues within their hiring process which you will find below along with action items that have or will soon take place.

This was the one part of the process that all agreed was working. It ranks well with the search engines, sees a lot of traffic and analytics show a good number of visitors start the application process.

This was found to be a complete failure in all aspects.

Preliminary results show that once an interview takes place the rest of the process including offers/rejections, on boarding, etc is very favorable.

One major revelation was the employee referral program was a “canary in the mine” of sorts. The program had been very successful in large part because the front door (ATS and resume@xxx.com) were such an awful experience that job seekers would network in the back door to employees.

At some point employees referred fewer candidates because they were annoyed with how slow the process was and they would look bad to their friends and connections.

It was filled 10 calendar days from the Friday meeting because a Recruiter met with the Hiring Manager to talk about the position. The Recruiter went to the ATS and realized there were qualified candidates and a great hire was quickly made.

My question to those in a management role is this, if/when the War for Talent comes back will you be ready? Is your staff ready? Is the process smooth? Is the experience job seeker friendly?

Are you willing to find out?

I should not say this but three days in a row of Minnesota Morning, I am on a roll. What’s the number it takes to make something a habit, 21 days? Baby steps Paul, baby steps. Stay focused, you know you can do it.

Yes, I am talking to myself. Yes, it happens often. It’s when the voices start having conversations and I am just a spectator. OK, the last two I was joking. I swear.

For better and worse Minnesota has been on cable news the past two days. No, not because of the snow storm (we have been trumped by our East Coast friends) but because of this billboard on I 35 north of Minneapolis:

This is Part 2 of a 3 part series on how a VP Marketing at a Minneapolis company became an Undercover Jobseeker to apply for a job at her own company.

Click this link for Part 1: Why The Undercover Boss Should Be An Undercover Job Seeker Part 1 Of 3

The job had been open for about six weeks with very little action on it and was essentially the same position “Julia” was offered many years ago. Knowing the position well and of course the manager of the group along with the HR/Recruiter team we did the following:

Julia and I agreed to go this far (more than I expected) as she wanted to play this out the whole way up until an interview would be scheduled with the idea of getting the complete experience of applying at the company.

A Smartphone may not sound like the best way to spend your money if you are currently unemployed, but in fact, it just may be. Job hunting in today’s market is all about getting there first, getting there fast and leveraging all of the Internet tools available to you.

Yes, you can do this from the comfort of your home (or Starbucks), but when you are out of the house (hopefully on a job interview), a Smartphone can give you the edge you need to get the next interview. Now I’m not saying that you won’t get a job if you don’t have a Smartphone, I’m just saying this is another tool in your Job Marketing Toolkit.

I am so excited today as we have sun two days in a row!!! And no complaints from me regarding our 6”-10” snowfall as I watch the East Coast get dumped on again. 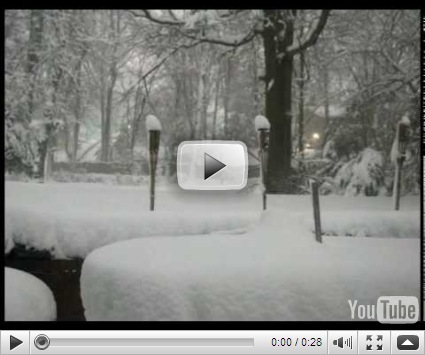 CBS rolled out a new show following Super Bowl XLIV called Undercover Boss. Reviews of the show have been fairly good with many saying how cool it is that a CEO or President of a company would hang out with the “little people”.

I think it is a cool idea. I do wonder though, if CEO’s were providing real leadership they should be doing this already on their own to learn what the real impacts are of the decisions they make.

Last summer I was asked to speak to a C- Level peer group on a HR topic of my choice and was told I could “be real”.

Home Run, I thought. Turns out I had no idea...

I am having one of those moments where I am sitting at my desk and wondering where to start and instead of doing something productive I have looked at a bunch of web sites, watched Morning Joe and looked through my TweetDeck stream. Busy is not productive.

And I still have no idea where to start so I am doing this blog post in hopes that I can get my mind “jump started”.

What do the following people have in common?

•    Trailing spouse to a military soldier

These people have much more in common than you probably realize.  The commonality is what they are missing.  All of these people are missing the many benefits we get from working.  Of course, we all know that they are missing the paycheck, but there are other aspects to work that most of us take for granted, until we no longer have them.   When you are in the work trenches it’s kind of hard to think you would miss anything.  You probably think the idea of not working sounds like a dream, and it can be, but not without recognizing what things you are missing and taking action to replace them.

Who Do We Hire For the Future of HVAC?

The growing trend of Baby-Boomers retiring from the HVACR industry has forced many companies to scramble to find candidates to replace those seasoned service technicians and journeymen mechanics.

Without a doubt, the best way to find potential employees is through referral networks. Managers and HVACR contractors must always be on the lookout for new talent, even if they are not actively hiring. Companies that are not fishing for new talent as actively as they should will certainly feel the repercussions once their elder employees decide that golf is more enjoyable in retirement than soldering pipe is in the field.

Proactive recruiting should be at the forefront of any HVACR organization's professional agenda. Success will come to those who realize the importance of filling their employee pipeline with talent. Some candidates won't last, eaten up quickly by the competition; that makes it vital to have a stable of potentials in your pipeline at all times.

Continue reading "Who Do We Hire For the Future of HVAC?" »